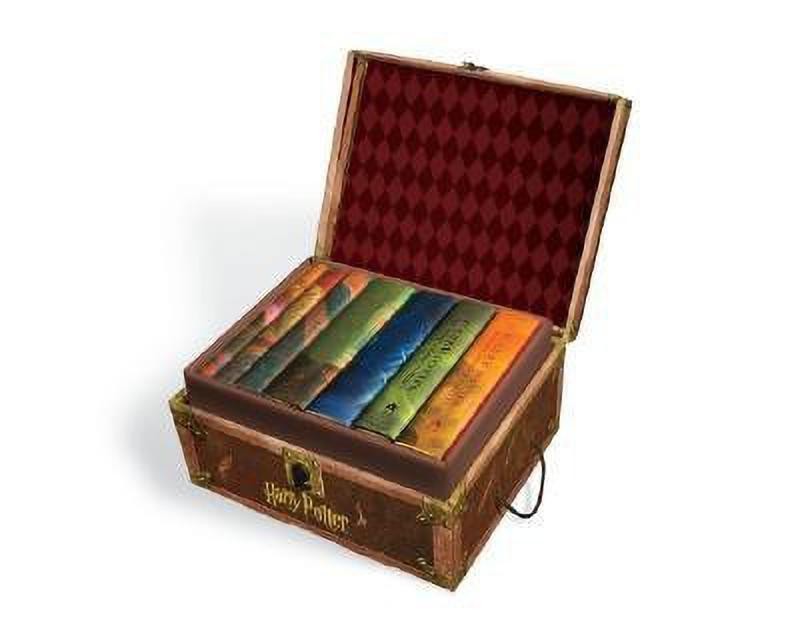 Harry Potter Boxset Books 1-7 is a collector’s edition package of the complete set of Harry Potter books written by J. K. Rowling. The set comes in a wonderfully designed box and stickers to go with it. The books are hardcover publications. Summary Of The Book The Harry Potter books are a series of seven fantasy books beginning with Harry Potter And The Philosopher’s Stone, in which the protagonist, Harry Potter, is introduced as a boy who lives in his uncle’s house, after his parents are killed. He is born with a talent for wizardry, which he is completely unaware of till his eleventh birthday. He lives a miserable life with his cousin Dudley, his uncle Vernon, and his stern aunt Petunia. As the story progresses, he receives a letter from a school for wizards and witches, named Hogwarts, asking him to enroll. His entire life turns around, when he finds out that he is actually a part of an entirely different world and that he does not have to go back to living with the muggles anymore. Harry experiences many dangerous situations and uses the help of his friends and teachers to emerge mostly unscathed. He has to face the monster from the Chamber of Secrets in Harry Potter And The Chamber Of Secrets, a deranged criminal in Harry Potter And The Prisoner Of Azkaban and a competitive and life threatening tournament in Harry Potter And The Goblet Of Fire. Though liked by most people at school, Harry encounters people who seem to hate him for no reason, like Draco Malfoy and Professor Severus Snape, both from the house, Slytherin. Harry also has to deal with cruel treatment at the hands of the Ministry of Magic in Harry Potter And The Order Of The Phoenix. The sixth book introduces a dubious character called the Half Blood Prince and witnesses the death of one of the main characters. The seventh and the last installment in the series, Harry Potter And The Deathly Hallows, depicts a war between the forces of good and evil. Will Harry and his friends emerge triumphant? Harry Potter Boxset Books 1-7 is a fantastic collector’s item for fans, and a treat for those who receive this as a gift. About J. K. Rowling J. K. Rowling is a British author who has written a number of bestselling books, her most popular venture being the Harry Potter series. She has also authored The Casual Vacancy, The Tales Of Beedle The Bard, Fantastic Beasts and Where To Find Them, and The Cuckoo’s Calling. Rowling’s books have won numerous awards and have sold over 400 million copies worldwide. Her works have been translated into more than 65 languages. J. K. Rowling is also a noted philanthropist. She was named TIME’s runner up for its Person Of The Year award in 2007.