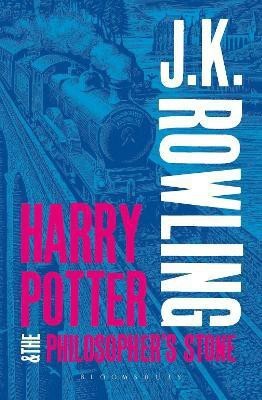 Harry Potter and the Philosopher's Stone(English, Paperback, Rowling J. K.) is a Books>F : Fiction &amp; Related items>FM : Fantasy genre book, written by Rowling J. K. and published by Bloomsbury Publishing PLC. It is available in English language with Paperback binding and got 224 pages in total. The International Standard Book Number or ISBN identification for the book is 1408834960 (ISBN 10) and 1408834960 (ISBN 13).

A young boy discovers that he’s about to enroll into a school for magic in Harry Potter and the Philosopher’s Stone. This Telugu translation captures the magic and wonder of the original Harry Potter series by J. K. Rowling. Summary of the Book Harry Potter is an ordinary boy. He lives with his aunt and uncle, and their son, Dudley, who are all horribly mean to him. His aunt told him that his parents died in a car crash. He has never had a birthday cake or so much as a toy to himself to play with. On his eleventh birthday, he receives a strange visitor, a giant of a man who calls himself Hagrid. Hagrid informs Harry that he’s quite as ordinary as he thought he was. He’s a wizard, and quite famous one at that. He’s invited to join the Hogwarts School for Witchcraft and Wizardry, the greatest school for magic in the world. He also discovers that his parents were murdered by a Dark Wizard who was defeated when he tried to kill the baby Harry. Now, Harry journeys to Hogwarts, where he will find new friends, and learn the lessons he must to protect himself against the dangers he must face. However, the Dark Lord isn’t gone just yet, he’s biding his time, and when he returns, he will be eager to exact revenge. About J. K. Rowling Joanne Rowling is an English novelist, best known for her Harry Potter series of fantasy novels. Rowling is famous the world over for her rags-to-riches story and she is largely credited with getting kids to read again. Her books sold record numbers and inspired a series of films and video games. Media Note The Harry Potter series was adapted into eight movies. This novel was adapted into the hit eponymous film starring Daniel Radcliffe, Emma Watson and Rupert Grint. The movie is available on DVD and Blu-Ray, so catch a copy today! Series Reading Order Harry Potter returns to school for his second year, only to discover that something evil is trying to kill all muggle borns in Harry Potter and the Chamber of Secrets.