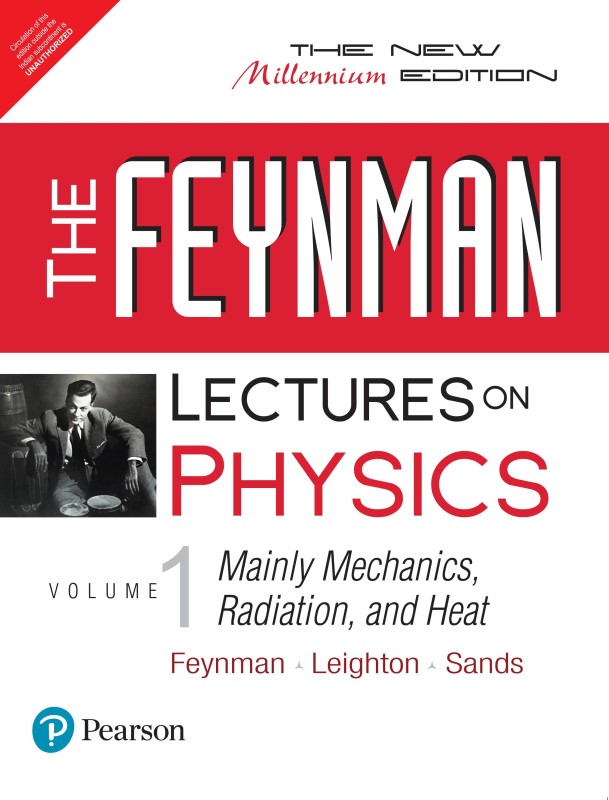 The Feynman Lectures On Physics: Mainly Mechanics, Radiation And Heat (Volume - 1) is a comprehensive report on the fundamentals of physics, explained in an inimitable manner by Richard P. Feynman. Summary Of The Book The Feynman Lectures on Physics was a series of physics textbooks that was published in 1964. This book is based on a set of lectures that Professor Feynman gave at the California Institute of Technology, for the benefit of the undergraduate students at the university, and is the first volume in the series. The Feynman Lectures On Physics: Mainly Mechanics, Radiation And Heat (Volume - 1) is the first volume of the three-part series. In the early 1960s, research in theoretical physics conducted by Feynman had helped to solve a number of troubling questions that were being presented by certain existing theories. As Feynman’s fame grew, he was asked by the California Institute of Technology to present a series of lectures, with a view to promoting interest and reviving excitement in the minds of students. Feynman agreed to present the lectures on just one occasion. Knowing that it would be a rare sight, every lecture was recorded, and every picture that Feynman drew on the board was photographed. A group of graduate students and physicists then put the lectures together in volumes, of which this is the first part. The first few chapters deal with atoms and their behavior, speaking of how all matter is made of atoms and how atoms are responsible for chemical reactions. After establishing the fundamentals of atoms and nuclei, the book goes on to talk about the relationship of physics to other subjects like Astronomy, Geology, Psychology and Biology. The next chapters deal with the conservation of energy, and how energy is converted from one form to another. After this, there are explanations regarding the rotation of matter in two dimensions, as well as space. There are also explanations regarding the harmonic oscillator, and other important physics concepts such as Statistical Mechanics and the Brownian theories. About The Authors Richard P. Feynman was a theoretical physicist and presented path-breaking research in the fields of quantum electrodynamics and quantum mechanics. Other books by Feynman include Surely You're Joking, Mr. Feynman; Six Easy Pieces: Essentials of Physics Explained by Its Most Brilliant Teacher, QED: The Strange Theory of Light and Matter, and The Pleasure of FInding Things Out! Richard Feynman was born in 1918 in New York City. Feynman studied at Far Rockaway High School, and later went on to study at Massachusetts Institute of Technology and graduated in 1939. In 1943, he received a Ph.D from Princeton University and was awarded a Nobel Prize in Physics in 1965. Feynman passed away in 1988, at the age of 69. Robert B. Leighton was an experimental physicist. Leighton was born in 1919, and was a popular experimental physicist. His professional career was spent at the California Institute of Technology. He is known for his work in the fields of particle physics, solid state physics and cosmic ray physics. Matthew Sands is a physicist. Sands was born in 1920, in Massachusetts. He studied Physics and Mathematics at Clark University, and then went on to become a physicist. He worked at MIT, before moving to Caltech.