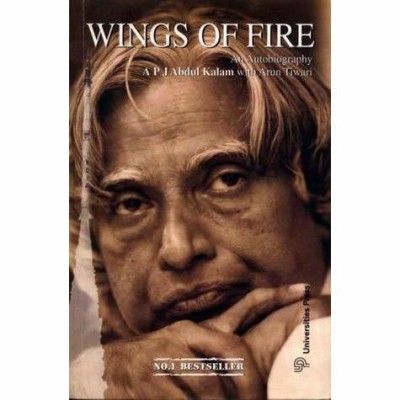 Wings of Fire(English, Paperback, Tiwari Arun) is a Books>D : Biography, Literature &ampamp Literary studies>DN : Biography &ampamp non-fiction prose>DN-FLK: Biographies and Autobiographies genre book, written by Tiwari Arun and published by Sangam Books Ltd. It is available in English language with Paperback binding and got 196 pages in total. The International Standard Book Number or ISBN identification for the book is 8173711461 (ISBN 10) and 8173711461 (ISBN 13).

Summary of the Book One of the most inspiring and popular autobiographies to read is Late Abdul Kalam’s Wings of Fire. In this book, the former president shares his personal experiences and minutest details of his life. It narrates his life, right from the former late president’s rise from humble beginnings to his vision for the country in the year 2020. It has been divided into four parts equally. The first part narrates his early life that includes his parents, teachers and other influential role models. The second part deals with Kalam’s further education, work experience and his involvement with the military projects. The third and the fourth parts are about his ISRO career and the last phase of his life, where he was bestowed upon with several awards and honours. Buy Wings of Fire: An Autobiography online to read more about this great personality who played a pivotal role in shaping our country’s future. About the Author Wings of Fire - An Autobiography  was written by Dr Kalam and Arun Tiwari. Kalam examines. Kalam talks about his early life, effort, hardship, luck and chance that led him to become the frontman of Indian space research, nuclear and missile programs. Kalam began his career after graduating from MIT in Chennai, India. He worked with Hindustan Aeronautics Limited and later moved to ISRO and helped establish Vikram Sarabhai Space Centre and pioneered the first space launch-vehicle program. Kalam later moved to DRDO to lead the Indian nuclear weapons program. A former President, and one of the smartest and inspirational Indian personalities that the world has ever seen, Abdul Kalam died on 27 July 2015, during a speech at Indian Institute of Management in Shillong, Meghalaya.

LISTENING IS THE NEW READING