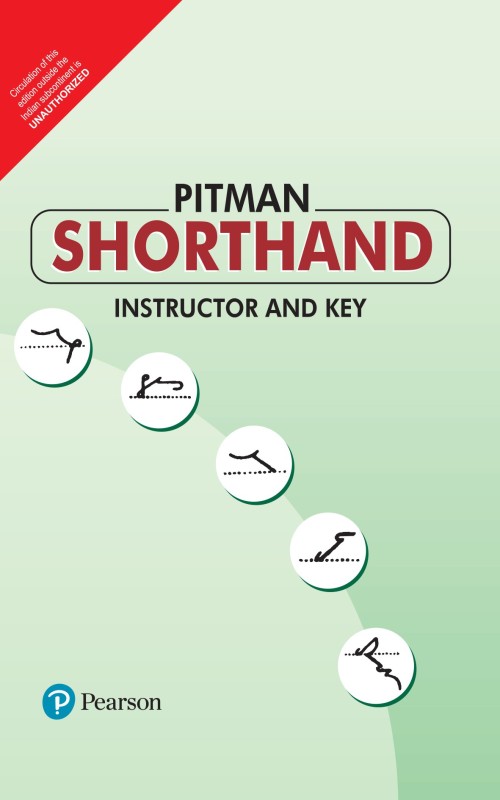 Pitman Shorthand Instructor And Key provides a complete coverage of the Pitman shorthand system. Summary Of The Book Shorthand notation systems evolved to make it easier to take notes, as the short, symbolic representation for sounds and words make it much easier to write down long sentences at high speed. This could be highly useful while taking down lectures and speeches and in other situations. There were shorthand systems in use before Pitman's, but his system was much more streamlined and organized so it became highly popular throughout the English speaking world. The Pitman shorthand system is phonetic and the emphasis is on consonants rather than on the vowels. Vowels are optionally represented by small shapes like dots and dashes besides the main strokes. The strokes themselves can be slightly varied to convey different sounds and even words. For instance, the thin stroke that looks like an open bracket '(' represents the sound 'th' as in think, or thank, and it can also represent these common words as a whole. The thick '(' can be used as a notation for the words they, them etc, and it also represents the sound of 'th' as it sounds in these words. Pitman Shorthand Instructor And Key comprehensively covers all the basic strokes used in Pitman shorthand. It begins by looking at the symbols for consonants and vowels and discusses positioning, grammalogues, alternative representations for some letters, circle s and z and stroke s and z and so on. The latter parts of the book covers topics like the halving principles and the doubling principles, prefixes, suffixes and termination, and medical semicircle. The book then goes into advanced topics like advanced phraseography, business and political,phrases, special contractions, note taking and transcription. The book also provides a list of industry related phrases - banking and stockbroking phrases, insurance, railway and technical phrases. Pitman Shorthand Instructor And Key ends with a chapter that illustrates shorthand in practice. It has a useful appendix section providing outlines for the names of some cities and towns, and grammalogues arranged alphabetically and then phonetically. It also provides a special list of contractions. The book exhaustively covers the Pitman shorthand system. It can be a study guide for new users, while also serving as a reference for those who already use the system. About Isaac Pitman Isaac Pitman was a teacher. His Pitman Shorthand system has proved to be one of the most enduring forms of taking shorthand notes in English. Isaac Pitman was born in 1813, in England. He was an ardent advocate of spelling reforms and supported the idea of phonetic spelling. His interest in language and spelling reforms led him to develop a phonetic shorthand system.

More from the author - Issac Pitman