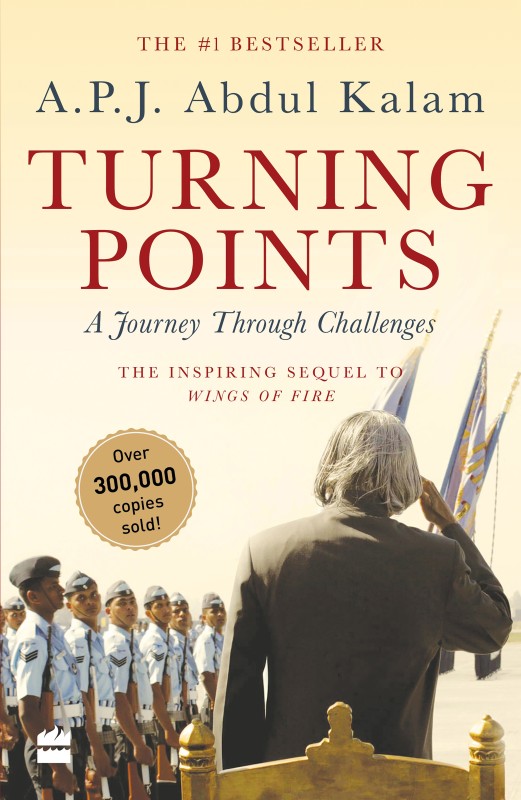 Turning Points: A Journey Through Challenges picks up where Wings of Fire finished. Summary Of The Book This book, Turning Points: A Journey Through Challenges, takes up the story from when A.P.J Abdul Kalam became the President of India. It covers his acceptance of the post of the President of India, his term in office, his efforts to make his term meaningful, and the challenges he faced. His term from 2002 to 2007 was an eventful one. The President of India is just a titular head with minimal powers. But, the office is one of great influence and Kalam used it to best effect. He got the government and the public to focus on issues that were relevant to the country's all round growth. He initiated programs like PURA to try and integrate rural areas into the general economic and technological growth of the country. He dreamt of taking the whole of India on his vision for the country in the new millennium, and he saw no reason why the villages should be left out in this vision. Turning Points: A Journey Through Challenges is more about Kalam’s vision for his country rather than about himself. He tries to provide a blueprint for development, and for reforms in the government and judiciary. Dr.Kalam is a strong advocate for the use of technology and a proponent of e-governance. Even the little bits of personal experience during his term that he gives, he links with these ideas. For instance, he mentions the controversial dissolution of the Bihar assembly for which he later offered to resign. But, he does not focus on the political or personal implications of this decision, instead, he chose to highlight his use of electronic communication in lending his approval to this move, for he was in Moscow at that time. He made the office of the President accessible to the public. He used his popularity and high visibility to inspire the youth of the country and convince them to believe in his 2020 vision for India. He urged the young people to dream big, and to believe in their country's destiny. Turning Points: A Journey Through Challenges describes the term in office of one of the most charismatic Presidents of the country. About A.P.J. Abdul Kalam Dr. A.P.J. Abdul Kalam is a renowned scientist, writer, administrator and former President of India. Other books by Dr. Kalam - Developments in Fluid Mechanics and Space Technology, Ignited Minds: Unleashing the Power Within India, The Luminous Sparks, India 2020: A Vision for the New Millennium, and Wings of Fire: An Autobiography. He has written autobiographies and books that detail his vision for the future of the country. Dr. A.P.J. Abdul Kalam was born to a poor Muslim fisherman family in Rameshwaram, Tamilnadu in 1931. He studied physics for his undergraduate studies, in Trichy. He then moved to Madras and studied Aerospace Engineering at the Madras Institute of Technology. After finishing his studies, he joined the DRDO’s Aeronautical Development Establishment. Kalam played a pivotal administrative role in the Pokhran II project. He became the eleventh President of the country in 2002.